Blue Trails > A Place for the Birds 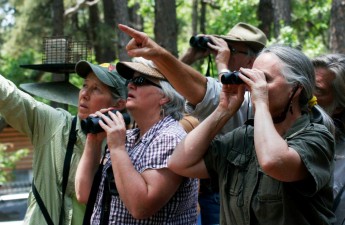 The Verde River flows through central Arizona for 192 miles, and along the way, it attracts, feeds, provides breeding habitat, and concentrates more than 200 species of migratory and resident birds. The river first erupts at 4,400 feet elevation and, at its endpoint with the confluence with the Salt River near Scottsdale, Arizona, it has descended to nearly 1400 feet of elevation. It is this altitudinal range and the fact that this beautiful river runs through a wide mix of habitat types that attracts so many birds.

Beginning in the grasslands near Paulden, Arizona, the River quickly travels through some of the Southwest’s most pristine and diverse riparian habitat, dominated by Fremont Cottonwood/Goodding Willow forest type – the rarest in North America. Cottonwoods and willows provide shelter, nesting sites and forage for most of the “riparian obligates”, like Belted Kingfishers, Common Black Hawks, and Desert-nesting Bald Eagles, one of the smallest varieties of Bald Eagles. Black Phoebes, Song Sparrows, Red-winged and Yellow-headed Blackbirds, Marsh Wrens and Common Yellowthroats are regularly-seen songsters along the River, as are Abert’s Towhees, Canyon Wrens, and Greater Roadrunners.

During the spring and fall migrations, many thousands of birds use the Verde River as a migration highway – a very visible and supportive thoroughfare for species like White-faced Ibis, Snowy Egrets, Northern Harriers, and other waterfowl working their way to northern breeding areas. The Verde River concentrates birds like a magnet, since only a few yards from its center, the lush riparian habitat gives way to Sonoran Desert, upland chaparral, grasslands and steep rocky canyons. While this landscape is beautiful and fascinating, it can’t provide the necessities of vegetative cover, cool air, and food sources that a flowing, healthy river corridor can provide.

Each spring, the Verde River Valley Nature Organization produces one of the Southwest’s best birding festivals – the Verde Valley Birding and Nature Festival. The festival brings excited birders from around the region to see such specialties as Red-faced Warblers, California Condors, Olive Warblers, and 7 species of Hummingbirds! It is not unusual for the participants to spot well over 200 species each year, and it’s fair to say that more than half of these would not be here if it weren’t for the wonder of the Verde River – a true emerald oasis in the desert.