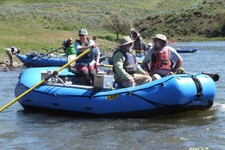 Over the past few years, Southwestern Idaho’s Weiser River is increasingly on ICL’s radar for a variety of reasons. This little known gem is a 103-mile long tributary of the Snake River, flowing past the sleepy towns of Council, Cambridge, Midvale and on into Weiser. For most of the upper stretch, the river follows a narrow course through the mountains until it reaches a small canyon, rolling hills and open farmlands.

Every spring the Weiser provides a fun class 2 boating stretch; upper reaches provide trout fishing year round; and the Weiser River Trail, an 84 mile long Rails-to-Trails trail, parallels almost the entire course of the river. If winter brings enough snow, the trail is groomed for cross-country skiing. Local hot springs provide fun lodging year-round, as does the Weiser River Trail RV Park which is in the middle of building a hostel to host trail bikers.

The Weiser River is also 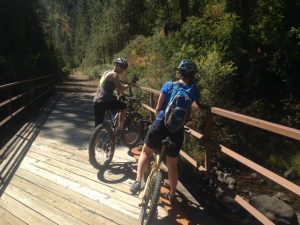 the site of the largest dam proposed in Idaho since the disastrous Teton Dam in the 70s. As currently slated, the Weiser-Galloway Dam would stand more than 280’ tall and flood more than 15 miles of river. Notably, the whitewater stretch and the only two public access points on the river would be lost. At least fifteen trail miles would need to be relocated.

The boating put-in sits 90 miles from downtown Boise–Idaho’s population hub–and yet relatively few people boat or fish the river, or hike or bike the trail in any given year. Why is that? Perhaps its because its off the beaten path? Or maybe because its such a short whitewater season? Or maybe because there isn’t a lot of easily accessible information about the recreation opportunities and how to access them? We couldn’t do anything about the area’s location or the length of the boating season, but we could spread the word. But we’d need some help to do it. 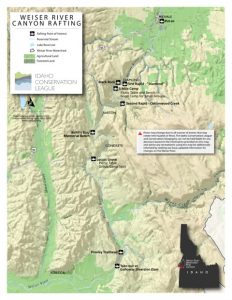 ICL partnered with Conservation Geography, a Boise-based GIS and mapping non-profit that works almost exclusively in support of natural resource conservation organizations. We met with locals who boat the river on a regular basis to get intel on rapids, camps, and other places of note, which Con Geo then used to develop a simple boating map. Local river advocates and colleagues at the Friends of the Weiser River Trail helped us better understand the natural and cultural history of the area; they also directed us to lodging, restaurants and shuttle outfits. Our Con Geo cartographer utilized publicly accessible fisheries, land use and trail data. And the result is our first ever interactive StoryMap!

The StoryMap orients people to the area and lets them learn its natural & cultural history. It also links to local Chamber of Commerce and lodging websites as well as ICL’s Plan Your Own Adventure webpage which provides more detailed info about recreating on the river and trail. We’re particularly excited that this collaboration led to the first ever Weiser River boating map!

Work on the StoryMap wrapped up this fall, and we’re excited to use it in coming months as an outreach tool to promote the area and to connect people to the river & trail. ICL firmly believes that by connecting people with this river, they will be more willing to defend it against this needless dam, not to mention be part of a movement to care for the whole river system.

As we’ve spent time in the Weiser Valley, its common to hear local folks talk about feeling conflicted about the word getting out about “their” river. This is conservative, rural Idaho, and “outsiders” sometimes get a second glance. Creating the StoryMap led us into the living rooms of people who never thought they’d speak to someone from the Idaho Conservation League, much less collaborate with us. But they recognize what so many people feel deeply: rivers are irreplaceable, and they are worth fighting for. Even if it means breaking bread with untraditional allies and welcoming outsiders into their neck of the woods.

As ICL continues to develop strategies to improve open spaces, outdoor recreational resources and community priorities, we understand that collaboration and building relationships will make us all successful. Our Weiser River StoryMap is a great example.

Check it out, and make plans to come experience Idaho’s beautiful Weiser River valley for yourself!