Blue Trails > Down to the Wire: Your Help Needed to Reauthorize the Land and Water Conservation Fund! 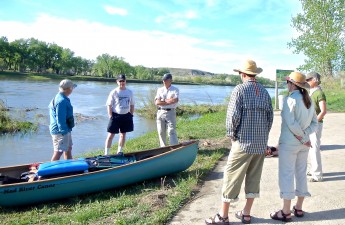 There are few conservation laws on the books that have touched more people in more places than the Land and Water Conservation Fund (LWCF). Nearly every state park, city park, fishing access site, public lands trail, wildlife refuge, national recreation area, national historic trail and national forest in my home state of Montana has received LWCF funds for land acquisition or infrastructure improvements over the past 50 years. I bet that the same is true in your home state. Unknown to me though were the incredible numbers of public pools, baseball diamonds, playgrounds, local parks and open spaces that were also at least partially funded by LWCF. It’s not an exaggeration to say that generations of children have grown up playing on LWCF funded lands across the U.S.

The Land and Water Conservation Fund was founded in 1964 to conserve America’s natural and cultural heritage. Authorized for 25 years at a time, LWCF will expire at the end of the month unless Congress acts. One thing that sets apart this 50-year, bipartisan program for other conservation measures is that it is funded through royalties from offshore oil and gas development on the publicly owned Outer Continental Shelf rather than from taxpayer dollars. It has been incredibly effective. LWCF provides funding for national parks, national forests, wildlife refuges and national historic sites, as well as state and local parks, working forests, river recreation, connecting urban youth to nature, hunting and angling access sites, and protecting water quality and drinking water for people across the U.S. It is a cornerstone of our nation’s $646 billion recreation economy, providing funding for the public spaces that we love for half a century.

Last week I joined a diverse group of recreationists, conservationists and outdoor industry professionals from across the country on a trip to Washington, D.C. sponsored by the Outdoor Alliance. Our goal was to underscore the importance of LWCF to our congressional delegates and to ask them to support reauthorizing it. At the end of the day we were lucky enough to be able to thank all of our Montana delegates – Senator Jon Tester, Senator Steve Daines and Representative Ryan Zinke – for not only supporting LWCF reauthorization, but also for signing a “Dear Colleague” letter to their peers asking them to as well. Where do your delegates stand? Time to find out!

LWCF is about to expire. Next week, September 30, is the deadline for Congress to either reauthorize LWCF or include it in a Continuing Resolution. Please take a moment right now to email your Representatives and Senators and ask them to permanently reauthorize and fully fund the Land and Water Conservation Fund. While you are at it, ask them to sign the “Dear Colleague” letters that are being passed around the House and the Senate. Time is running out to renew this popular, important and common sense conservation tool.