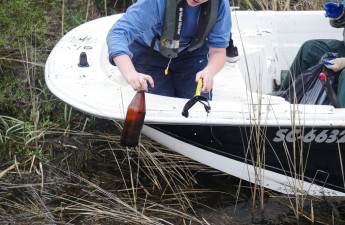 SSWA’s David Fladd organized the event and his son Jacob brought his friends from the Fort Dorchester High School Honor Society to help unload trash from the boats. Billy Condon of Triangle Char and Bar provided a great lunch at the landing.

Robert Ford, SSWA President, used his beautiful Scout boat as a barge to transfer trash from the folks downstream to the dumpster at Jessen’s where Phil Philyaw and his crew helped unload boats as they arrived.

It was a great day. We picked up tons of trash, spent time on a beautiful river and interacted with some great people. We felt very good about our results but were dismayed about the amount of trash we encountered. The Ashley is an amazing resource and deserves more respect.