Blue Trails > Take a Paddle on the Wild Side: A Trip Down the Verde River Wild & Scenic Stretch 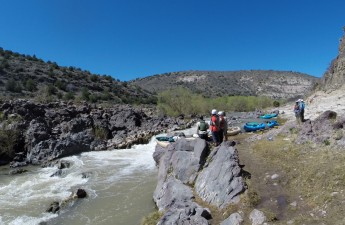 Many of the most popular stretches for paddlers along the Verde River are through the sections of the Middle Verde known affectionately as the “mild and scenic.” There are few serious hazards within this stretch, as the river has some fun Class II riffles and is safe and enjoyable for inexperienced boaters, or those who just want a relaxing paddle on one of Arizona’s last perennial rivers. However, below the Beasley Flat river access point, exists the Wild and Scenic stretch of the Verde River, featuring more challenging Class III and Class IV rapids, as well as open stretches of magnificent desert wilderness.

I recently was lucky enough to join a U.S. Forest Service trip down the Verde River – a 3-day jaunt with staff from Prescott, Coconino and Tonto National Forest offices. The plan was to paddle from Beasley Flat to Childs River access point – a little over 17 river miles overall. I admit, as a paddling newbie, I looked forward to the trip with a mix of excitement and trepidation, but to my relief, I was not the only beginner, and we all knew that we would all be safe in the capable hands of the USFS river rangers.

As we organized our gear at Beasley Flat, Verde River Ranger Dexter Allen gave an overview of the trip, accompanied by river ranger colleagues Don Sullivan, Mike Roseman, and Brian. By the time we shoved off from Beasley Flat, the flows in the Verde River, which had been a bit higher earlier in the month due to some spring rain storms, had already tapered down to approximately . 2014 was a disappointing year for snowpack once again – extending a long series of years with low snowpack due to prolonged drought conditions and changes in precipitation patterns that we are seeing across the West.

Water levels will often change the nature of river hazards. Lower flows expose more rocks in the channel, making some rapids more difficult to navigate, while tempering others. On the first day, we navigated the safer routes along the Verde River, bypassing the Prefalls Rapid and, after lunch, lining our boats down the Verde Falls. Our first significant rapid – Off the Wall – was managed just fine by everyone. Apart from a few hang ups on rocks through Rock Garden Rapid, we were starting to get a better feel for the boats. We ended our first day at Palisades Rapid, and camped just below.

The next day was our longest on the river – and a big day for whitewater. We crashed through Bull Run, Punk Rock, Bushman, Big Pink and White Flash rapids – all without major mishap (although a few of us less experienced paddlers walked around some of the more dicey rapids). It was also a great day for sighting some of the rare raptor nesting sites, and observing a variety of changes on the landscape that . The canyons surrounding the Verde River provide quality nesting habitat for bald eagles, and Wild & Scenic protection of the Verde River corridor helps to sustain this vibrant population of these magnificent birds.

Our last day flew by, with just a few Class II riffles, and some sketchy meanders through trees, low hanging branches, and reeds. Before we knew it, we were arriving at Childs River access point, to unpack the boats and load up our gear. By the time we reached the end of our trip, flows had declined to about , due to the thirst of upstream communities. Inspite of the ongoing severe drought gripping Arizona and much of the Intermountain West, the journey was a testament to the Verde River’s resilience – and to the advocates who champion it – to keep it flowing for all those who enjoy and depend on the Verde River, well into the future.

A special thanks to the U.S. Forest Service staff and volunteers who participated in this trip, and otherwise made it all come together – Dexter Allen, Don Sullivan, Mike Roseman, Brian (whose last name I sadly can’t recall – sorry!), Jennifer Burns, Omero Torres, Albert Sillas, Julie Rowe, Janie Agyagos, and the USFS volunteers who drove us to the put in at Beasley and back from the take out at Childs. Thank you also to Chip Norton with Friends of the Verde River Greenway for his tips and guidance on the river.