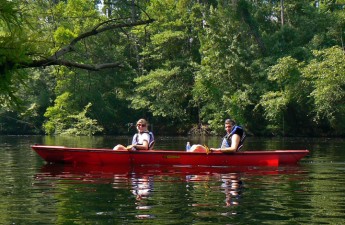 Last weekend, I rolled up under the Main Street Bridge in Conway, South Carolina, to see more than 40 people already unloading the kayaks and canoes and getting into the water! What a sight to see so many people laughing and excited to get out on the blackwater Waccamaw River Blue Trail on a sunny Saturday morning. (Blackwater rivers get their dark, transparent color from tannins that leach into the water as leaves and vegetation decay. Most major blackwater rivers are found in the Amazon and the Southeastern U.S.!)

The day was so fun for me, personally, because not only was I there to shoot some videos and photos of both the river and the people on it that day, but it was my first time paddling with such a large group!

It was fun to share the day with so many people that love the Waccamaw. I’m a bit of a plant lover, so it was great to find several people in the group that knew a lot about the local plants. I found some photographers and videographers, some wildlife enthusiasts (who were much more excited about seeing a couple of snakes hanging out in trees at the river’s edge than I was), and paddlers that ranged from a very nice young boy , a college student kayaking for the very first time up to some quite rambunctious retirees who paddle a lot!

It was an inspiring day for me. Blue Trails really can connect communities to their river. I saw it first-hand. The Waccamaw River has a strong and growing community that’s supporting it and cheering it on, celebrating its value as a recreational destination and important natural resource. Paddlers that are excited to share their river with others. A local newspaper that happily tells the river’s story. A river that breathes life into several cities and communities.

Keep your eyes out for some posts featuring some of the unique plants and wildlife of the Waccamaw!