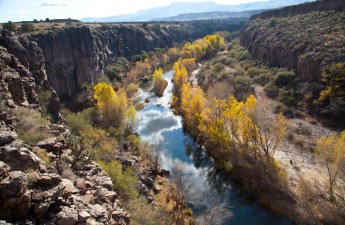 Settling on cozy couches in an office building nestled in the well-groomed vineyards and gardens of Page Springs Cellars, I listened to owner and winemaker Eric Glomski tell the story of how he came to run one of the most successful and cutting edge vineyards and wine-making businesses in the Verde Valley.

It is a story of deep connections to place. “Wines capture places,” Eric related as he shared the story of his beginnings. The flavors, aroma and textures of a wine can bring back a surge of memories from the place where the fruit was grown.

Wine making in the Verde Valley has bloomed in recent years, with local wines earning recognition among savvy connoisseurs. Once known solely for the red rocks of Sedona, visitors are now discovering the charm of other valley communities, and enjoying the local wines and craft beers produced there.

For many of these budding industries, including Page Springs Cellars, sustainability is a core value, and simply good business. “My livelihood is linked to how I treat the land,” Eric went on, and spoke with pride about the increase in forest habitat and wildlife diversity on his property since he began his vineyard operation. In the arid high desert, sustainable water use is also a critical concern.

For an area that grew up on mining, ranching, and agriculture, the transition of some agricultural lands to more water-friendly grape production has been a boon for sustaining small-scale agriculture in the face of resource scarcity. On average, established vineyards can use about a tenth of the water and enjoy higher profit margins, depending on the grape variety. Data from the Southwest Wine Center has also shown that higher quality grape production trends toward lower water use or even dry-farmed conditions for the vineyard. It is economically rewarding as well, with area wine production generating about $25 million annually, employing over 100 people, and prompting $6.5 million in spending at tasting rooms, vineyards, and wineries.

Dating back as far as the 16th century, Spanish settlers in Southern Arizona tended vineyards and made wine, and in the 1800’s European settlers along Oak Creek produced wine for area miners. Arizona and New Mexico once combined to have more vineyards than California, but with Arizona as an early Prohibition supporter, its wine industry ceased with passage of the 18th Amendment in 1920.

In the 1970’s, viticulture slowly began to reemerge in Arizona. The first wine-making license was issued in Yavapai County in 1981, and over the next three decades, dozens of new vineyards were planted. While California wines may grab the spotlight, the climate and soils of Arizona are uniquely suited for vineyards. Alkaline soils layered with minerals and marine sediments mingle with volcanic intrusions, perfectly blending with climate and elevation.

While the Verde Valley remains predominantly rural in character, it is a growing region, largely due to its natural amenities and attractions. Vineyards have been an economically viable means to preserve local agricultural resources, open space and wildlife habitat in the face of growth pressures. Growth also creates challenges to protecting the Verde River, one of the last free-flowing, perennial rivers in Arizona. By focusing on a less water-intensive, valuable crop such as grapes, the wine industry is doing its part to protect the natural resources of this vibrant destination.

Popular tourist excursions, such as “Water to Wine” tours, highlight creative ways economic growth and outdoor adventures are paired in the Verde Valley. Imagine paddling a desert stream in the morning, then reflecting upon the adventure under tall cottonwoods with fellow paddlers at a local vineyard for the afternoon.

The Verde Valley wine industry is increasingly touching on three important tenets – protection of environmental values, creation of economic benefits, and supporting social opportunities. Raising a glass of superb locally produced wine can be one of the most enjoyable ways to do your part for a sustainable future.

Susan Culp is a consultant on conservation policy, and works out of her home in Sedona, Arizona. She currently serves as the Verde River Project Coordinator for American Rivers, a national nonprofit conservation organization dedicated to protecting and restoring America’s rivers and fostering river stewardship. Phone: (928) 554-4546, sculp@nextwestconsulting.com.
Photo Credit: Verde River, Jamie Mierau