Blue Trails > The Rivers That Run Through Us 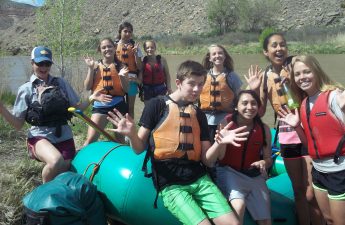 Today’s blog is from Dan Omasta, Executive Director of River Restoration Adventures for Tomorrow (RRAFT). Based in Gunnison, Colorado, Dan and his team protect the long-term health of watersheds through community engagement and riparian restoration. RRAFT is a Connecting Communities to Rivers Grantee.

Do you remember that moment when you first stood along the bank of a river – staring into the endless rhythm of riffles and transposed yourself into that world of water?  What must it be like to be an elk meandering down for a cool drink, that fish feeding upstream, or the willow bending in the current? Rivers breathe life into all they touch and support the awe-inspiring majesty we find in our outdoor world.

John Muir famously explored the idea that, “rivers flow not past, but through us” – a concept that embodies humanity’s unbreakable connection to its rivers.  Even before European explorers spread across North America, wild rivers provided a source of food, travel, and cultural understanding to the indigenous peoples that traveled their banks.  As Anglo settlers established their own way of life across these lands, rivers provided similar function – but were also harnessed to provide agriculture, power, and opportunities for mineral extraction.  Today, we continue to place more strain on our rivers; demanding reliability, quality, and limitless application of their bounty. 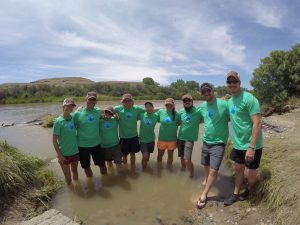 Whether you live along the banks of a small alpine creek or in a suburb of a vast metropolitan area, rivers create a sense of place.  They provide the recreational, economic, and social values that develop a particular drainage.  From salmon fishing in Washington to agriculture on the Western Slope of Colorado, rivers provide a shared identity among people of a specific region.  This common sense of place creates the foundation upon which we build the collaborative action necessary to protect our waterways – a base of support that erodes under the force of disconnection.

River Restoration Adventures for Tomorrow (RRAFT) is a small non-profit outfitter based in Gunnison, CO, whose mission is to protect the long-term health of watersheds through community engagement and riparian restoration. In 2016, we partnered with American Rivers to address the dangerous trend of disconnection in our watersheds. This past season, RRAFT worked to rebuild connection within the Gunnison River watershed by increasing opportunities for citizen participation, developing greater understanding of local ecological threats, and enabling hands-on protection of the river itself. 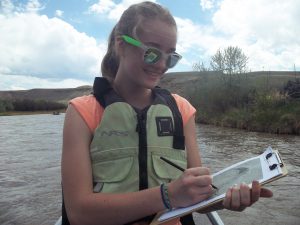 With support from American Rivers, RRAFT engaged more than 80 people on conservation-based float trips over the course of the summer. Participants came from widely diverse backgrounds but found common cause in the protection of the Gunnison River.  Farmers worked alongside teachers to treat Russian Olive trees; veterans who served in Iraq and Afghanistan teamed up with visually impaired civilians to collect trash from riverside campsites; and BLM officers collaborated with local sportsmen and women to improve the health of the wildlife corridor. Local youth explored the wealth and adventure that the Gunnison provides for them and their families. In a time of such divisive politics and diverging approaches for river management, these citizens came together along the banks of the Gunnison and found common cause in the protection of their watershed. They are farmers, soldiers, immigrants, and youth – but they are also westerners.  Their livelihood is inherently tied to the health of this watershed.

As the pressures of climate uncertainty, urban development, and resource extraction continue to affect our watersheds, this notion of a “shared sense of place” is even more critical to the community-based solutions necessary for river conservation.  This collective interest in the health of regional watersheds echoes the truth in John Muir’s idea of rivers running “through us” all.  Healthy watersheds are the heart that beats for our continued existence as a people, the lifeblood of our ancestors, and the cornerstone of future generations.  By coming together along the banks of a local river, communities can strengthen their shared identity and fortify the critical connection to the watersheds that provide so much for us all.